A summary of The Five Dysfunctions Of A Team By Patrick Lencioni (Summarised by Paul Arnold – Trainer & Facilitator – paul_arnold@me.com) 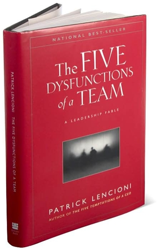 A summary of  The Five Dysfunctions Of A Team

There are five interrelated issues that undermine the performance of a team:

1)    Absence of trust. If the members of the team do not trust each other then they cannot be totally honest with each other.

2)    Fear of conflict. Without trust people will not have the healthy debates that are necessary to arrive at better thought through decisions.

3)    Lack of commitment. If the team have not aligned behind a decision then the individual members who did not agree with the final decision will ultimately be less committed to that decision.

4)   Avoidance of accountability. If they are not committed to the course of action, then they are less likely to feel accountable (or hold other people accountable).

5)    Inattention to results. Consequently, they are less likely to care about the group results (and instead focus on achieving their own goals).

The book is written up as a fable, following an artificial company through the five stages.

• Trust & respect are the foundation stones of any relationship

• Two types of trust: Trust in others to effectively deliver against their roles and responsibilities and psychological trust – i.e. trust not be taken advantage of

A team with no trust will:

•Conceal their weaknesses and mistakes from others

•Hesitate to offer help outside of their area of expertise

•Fail to tap into the skills of others in the team

•Waste time and energy managing their behaviours for effect

A team built on trust will:

•Appreciate and tap into each other’s skills & experiences

•Openly admit their weaknesses and mistakes

•Not be afraid to ask for help

•’Calling’ people on behaviour traits that demonstrate lack of trust

•Focus on the issue not the person

Teams that fear conflict will:

•Fail to tap into the opinions of team members

•Waste time and energy with posturing and interpersonal risk management

Teams that have no fear of conflict will:

•Be passionate and unguarded in their discussion of issues

•Discuss the most important and difficult issues

•Actively extract and exploit the ideas from all members

•’Calling’ people on behaviour traits that demonstrate fear of conflict

•Identify how we respond e.g. via Thomas-Kilmann conflict mode instrument

•Verbally agree (but unconsciously do not support)

•‘Call’ on your peers to maintain high standards

A team that fails to commit will:

•Have ambiguity around direction and priorities

•Miss opportunities due to excess analysis and lack of decision-making

•Encourage 2nd guessing among the team

A totally committed team will:

•All be aligned towards one goal

•Have clarity over objectives and roles

•Ensure that everyone’s ideas and opinions are properly listened to

•Make decisions with little hesitation (and can change direction without guilt)

•Be confident that their peers are completely committed to the decisions that were agreed on, even if there was initial disagreement

•’Calling’ people on behaviour traits that demonstrate lack of commitment

•Summarise decisions made in meetings

•Time-boxing decisions (any decision is better than no decision)

•Not holding members of the team accountable

•Lack of clarity of roles & responsibilities

A team that avoids accountability will:

•Create resentment among team members who have different standards of performance

A team that accepts accountability will:

•Call out one another’s deficiencies or unproductive behaviour

•Challenge one another about their plans and approaches

•’Calling’ people on behaviour traits that demonstrate avoidance of accountability

•Bonus for team not individual

•Status & ego get in the way

•In a team, the sum is greater than the constituent parts

A team inattentive to results will:

•Stagnate and fail to grow

A team attentive to results will:

•Willingly make sacrifices (such as budget, turf, head count) in their department or areas of expertise for the good of the team

•’Feel the pain’ when the team fails to achieve its goals

•Be slow to seek credit for their own contributions, but quick to point out those of others

•’Calling’ people on behaviour traits that demonstrate inattention to results

It’s easy to spot the errors of a team but much harder to correct. In that sense the book is hardly revealing (I guess most of us knew many of these anyway). For me the biggest gap is in not providing enough tangible approaches and techniques that a facilitator or leader could use to address the situation.

Consultant in the fields of Relationships and Change
View all posts by slooowdown →
This entry was posted in Decision making, Leadership, Management, Team building, The power of great relationships, Transformational teams. Bookmark the permalink.

8 Responses to A summary of The Five Dysfunctions Of A Team By Patrick Lencioni (Summarised by Paul Arnold – Trainer & Facilitator – paul_arnold@me.com)